After discovering that everything her father ever told her is a lie, b.b. is on the run to the only person she can trust, her radio show partner, Chulita. But with b.b.’s mysterious powers getting stronger everyday, and her father’s power organization on her trail, b.b. won’t find the safe haven she expects… and she may be putting her only friend in danger.

Angel and Buffy are on a mission to find the Mistress and close the Hellmouth—but will they turn on one another first? And is Drusilla the true evil behind the Hellmouth, or if there is another, even more powerful, that they should be worried about? Spoiler: there is.

THE NEW CLASS IS HERE! As the newly welcomed hedge Magicians and the traditional students come together for the first time in Brakebills history, things go wrong. A horrible accident leaves a student dead—and the only way to  keep it a secret is for the two groups to work together..

NECESSARY EVIL CONTINUES. As Jason begins to form his new team; THE OMEGA RANGERS, he struggles to keep the truth from Trini and Zack. And on another planet, Tommy has reached the Tower of Light, but is he truly worthy of becoming the WHITE RANGER?

The FBI has come to the small town of Archer’s Peak, allegedly to help stop more children from being killed. But when the Sheriff’s department turns their investigation to Erica Slaughter, the FBI is more interested in getting in the way. As the horrified townspeople watch Erica arm herself for a war they can’t see, tensions rise to their breaking point in this penultimate issue. 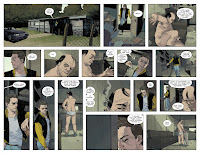 Greg and fan-favorite character Bismuth team up to defend Beach City while the Gems are off-world. Yeah… Beach City is doomed.