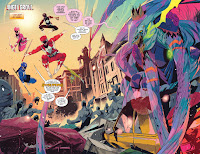 A HELLMOUTH TIE-IN!  THE FIRST APPEARANCE OF A NEW SLAYER! With Buffy in Hell, someone new has answered the call to save what’s left of Sunnydale. Who is this mysterious new Slayer? And how will the new blood cope with a team made up of a newly empowered witch and a half-human, half-vampire sidekick?

When the Gelfling village of Stone-in-the-Wood is at the brink of annihilation from a terrible enemy, the great warrior Ordon is sent on a quest to retrieve the mythical weapon that promises to turn the tide of battle. Now, his quest is underway and Ordon has an ally in Fara, the future leader of the Stonewood clan. Together, they must find the Dual Glaive before their entire way of life is destroyed. But with Ordon poisoned and Fara helpless, is their quest over before it begins?

It’s never a good thing when your ex has a crush on your roommate. It’s awkward enough that the part where Daphne’s roommates are all ghosts isn’t even the weirdest part of the situation. Daphne is about to learn that personal drama doesn’t stop when your heart does.

The curtain rises as Greg and Wirt are forced into what could literally be their final performance! The longer the play goes on, the more the two brothers lose of their souls. Will they be able to escape in time, or is it curtains for Greg and Wirt?

Herring’s cover is blown! Captured by the spyhunter Keiner, Herring must go toe-to-toe in a mental battle with his old nemesis, while outside their interrogation room, the alien monster begins a psychic attack of its own.