Teen hothead and star athlete, Bart Simms, is about to meet the Valiant Universe's greatest hero... himself!
The can’t-miss superhero adventure of 2020 starts here! 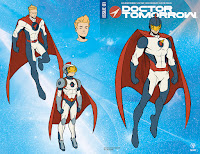 The Visitor’s origin revealed!?
As the unkillable assassin continues hunting his targets, the fate of the future begins to come into focus.