NEW SERIES. Discover the inner workings of the House of Slaughter in this new horror series exploring the secret history of the Order that forged Erica Slaughter into the monster hunter she is today. You know Aaron Slaughter as Erica's handler and rival. But before he donned the black mask, Aaron was a teenager training within the House of Slaughter. Surviving within the school is tough enough, but it gets even more complicated when Aaron falls for a mysterious boy destined to be his competition. Dive deeper into the world of Something is Killing the Children in this first story arc by co-creator James Tynion IV (The Department of Truth, The Nice House on the Lake) and co-writer Tate Brombal (Barbalien), with art by rising star Chris Shehan (The Autumnal) and co-creator Werther Dell’Edera (Razorblades). 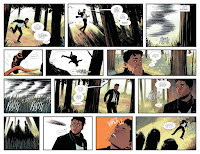 Can Avery clear his name and find out what’s really happening to him? On the run, Avery must elude the cops for the accidental death that he’s sure to be blamed for. William, Avery’s brother, tries to convince him to explain that it wasn’t his fault, but Avery is skeptical the authorities will believe a Black man… and terrified at the possible truth behind the incident.

Can the crew of the Serenity protect the Earth That Was and evade the Alliance when the time comes? The clock is ticking as our heroes realize the Alliance is rebuilding their portal and will eventually come for them here on Earth That Was. Even as they’ve been grappling with their own compromised status as colonizers, they will do whatever it takes to prevent the Alliance from destroying everything these people have.

FINAL ISSUE. The final battle is here! But what will Luck have to do with it? The team takes on Cassiopeia, the embodiment of Bad Luck, with Joseph’s new form unifying them like never before. Will Good Luck prevail...and is that even what the Unfortunates want?

What ancient and mythical danger awaits Bridgette, Duncan, and Rose as they seek Rose’s parents in the city of Bath? To complicate matters, an Arthurian knight pursues them with an offer for Rose and Duncan – join the Round Table or face death. If they survive the encounter, they’ll be pulled into the next phase of Bridgette’s plan… finding the “lair of the greatest hunter the accord has ever seen.”

How far are the Worshippers willing to go for the cause? Bristow has always done whatever is needed to rise through the ranks of the security services, but now he’ll make his move and reveal his true ambition. And Bristow’s secret meeting with a shadowy devotee may alter Jason and Chen’s fates forever…