In a post-apocalyptic future, our hero Archie Andrews is cursed to walk the world alone—well, alone with his souped-up jalopy. But Archie can defend himself—in fact, he’s the master of a brutal, deadly form of martial arts and must use his skills when he comes face-to-face with his rival and evil mirror image, Reggie. This action-packed one-shot is equal parts Mad Max: Fury Road and The Fist of the North Star, and reunites the "Jughead the Burgarian" team from the smash-hit comic THE BEST ARCHIE COMIC EVER! 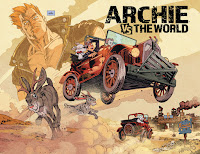 THREE BRAND NEW STORIES! First, in “Be Your Valentine!" Veronica keeps getting valentines dropped into her locker from a secret admirer. They seem very romantic, and she's intrigued. Then when she hides out to sneak a look at her admirer, she notices it's someone she’d never expect! Who is it, and what does he really want?

Then, in “The Ultimate Test,” superhero Mr. Justice touches down in Pembrooke. And he’s tasked with something of supreme importance: being Cheryl Blossom’s life coach! But will the job of making sure Cheryl Blossom treats others with kindness be the toughest mission Mr. Justice has ever been on?

Finally, Betty and Veronica stumble upon a super-battle between Steel Sterling and the Blue Bison, a hulking brute who possesses even greater strength than Steel. Noting that Archie is a big fan of Steel, the girls compete with each other to get an autograph during the super-battle, causing even more visual chaos. Will they get in Steel’s way of victory?