It’s Alive! Like a bolt of lighting, a new publishing deal has struck and IDW Publishing is excited to present the most electrifying new imprint of the year, It’s Alive!

IDW’s newest publishing partner, Drew Ford, brings with him first-rate taste and years of experience putting together dozens of graphic novel and comic book reprint collections for Dover Publications. He left his post there to launch his own imprint It’s Alive! with plans to continue his mission of saving the history of comics, one collection at a time.

That goal has led Ford to acquire reprint rights to several exciting graphic novel and comic book projects, and has now signed with IDW to solicit and distribute the titles produced by his new imprint,making those collections much more accessible to a larger audience. Ford has utilized Kickstarter in order to fully fund the restoration that each of these new collections deserves, with the campaign for Red Range by Joe R. Lansdale and Sam Glanzman being a recent success having raised nearly $20,000. This will be the first title published under the new imprint followed by Trina Robbins’ Dope, which launches its Kickstarter campaign this week. 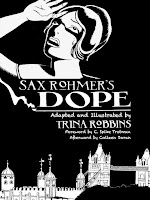 "We've long been impressed by the books Drew has produced in the past," said Chris Ryall, IDW's Chief Creative Officer. "He's beautifully packaged veryworthwhile but long-out-of-print material into amazing artifacts. We're all very excited to partner with Drew to help him continue to bring back into print such essential works that could otherwise be lost to history."

"This partnership with IDW ensures that the books I produce through my It's Alive! imprint will reach the widest audience possible,” said Drew Ford. “Beyond that, IDW continually produces work at the forefront of comics publishing, and I am grateful and excited to be working with them."

It’s Alive! joins other notable imprint partners that have come to define IDW’s diverse award-winning content including Top Shelf Publications, Yoe! Books, and the Library of American Comics. It’s Alive! Plans to publish 5-6 titles in 2017 with each title raising its money for publication via Kickstarter.