The exciting conclusion to Book 1! Bruised and battered, our heroes finally arrive at Halifax House, headquarters of the infamous syndicate. Along the way, they cross paths with some of Luna's old allies. Will they be a boon to Eldrick on his journey, or will they just complicate things further?

ATHENA VOLTAIRE AND THE GOLDEN DAWN, part two. The quest to retrieve Codex Agharta takes Athena to Shanghai. All that stands in her way are Nazis, mobsters, and one angry tiger!

Cass and Iola are a pair of rookie bounty hunters trying to strike it big on the wildest edge of the galaxy. Squeaking by on luck, tenacity, and a heavy dose of foolhardiness, they’ve begun to make a name for themselves in the hunting circuit. But when they accept a job from a wealthy exotic pet dealer, they stumble into a fight they weren’t prepared for--and become the newest target. Can the guncats outsmart the deadliest hunters and criminals in the galaxy, or will their luck finally run out? 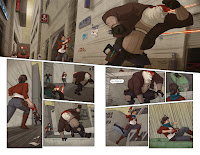 While Katie’s still working to find her way back to her own reality, she crosses paths with this alternate Earth’s queen of the undead. Now it’s Vampblade versus Zombie Tramp all over again!