The crew of the U.S.S. Enterprise left Earth four years ago. They’ve traveled to strange new worlds, defeated impossible foes, and made universe-changing decisions. But now, with the end in sight, they’ll have to face their biggest challenge yet. Step aboard the Enterprise with Kirk, Spock, Bones, Uhura, Sulu, Scotty, and Chekov as they begin the end of their original Five Year Mission and boldly go into an uncertain future in this new continuing Star Trek series! 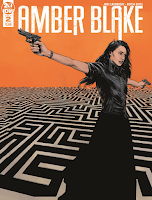 Amber Blake is a top recruit at a covert agency deadset on ending human slavery in all of its forms—and eliminating the criminals behind it. Now she and her partner Matt are deployed on their first mission—the sabotage of a sex trafficking ring run by the yakuza in Japan—but they might not be prepared for the monsters they’ll have to face. 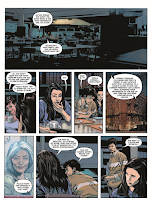 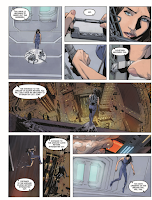 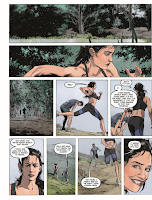 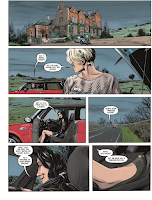 Dick Tracy is Sisyphus, pushing the law boulder up the hill as he struggles for reason and order in a world with none. His attempts at law and order are met with crime and chaos, in the form of unpredictable and absurd villains. But Dick Tracy will never give up trying, no matter the era or incarnation. Join Eisner Award-winning creator Michael Avon Oeming on a startling case through time and space!

Seeking a refuge from an unhappy life, Brandt returns to his ancestral home in Japan to find a haunted tree and the departed souls that are drawn to it, including his Grandfather. Brandt attempts to heal some of history's wounds but will he be able to find any measure of peace for himself when someone special from his past returns?

The 35th Anniversary of the Ghostbusters is upon us! Let’s celebrate with four spooktacular weekly comics featuring different Ghostbuster teams in all-new standalone adventures!

Some people wish for the ability to fully communicate with the animals around us, but when the furry, feathered, and finny inhabitants of the Central Park Zoo star talking and demand their release, the people of New York just wish they’d shut up! Egon Spengler and his EXTREME GHOSTBUSTERS race to answer the call, unaware of one creature’s fiendish plot to control the possessed animals and drive them to attack humanity in revenge for their incarceration.

A rush to the endgame reaches its big climax as a core team of select G.I. Joe operatives embark on the ultimate rescue mission! Will Snake Eyes defeat a brainwashed Storm Shadow in time to prevent a massacre? Betrayal, triumph, and twists & turns converge, crashing into the core of this primal conflict.

In northern England, Fergie’s mom Julie gets a fatal blow—while in London, Sid and Fergie… hit the pub? Plus, we take a trip back to 2002 to learn the true story of why Fergie’s father disappeared, and how super spy Dorothy Culpepper was involved. Hint: it’s basically all her fault!

The anthology series celebrating 50+ years of Star Trek continues in this new oversized special. Featuring four all-new tales written and drawn by some of today’s top creators, this new installment of the hit Waypoint Special will revisit fan-favorite characters all across the Star Trek universe.

“City at War, Part 1.” The battle for control of New York City begins! As the city splinters into different human, mutant, and ninja factions, the TMNT find themselves in the middle of the chaos! Eight years of storytelling have led to this!