From writer Cullen Bunn (Venom) and artist Adam Gorham (New Mutants: Dead Souls) comes this hilariously horrifying tale. Punk Mambo is a hard-living voodoo priestess who grew up in London, then relocated to Louisiana’s Bayou Country. Now, she's a mystical mercenary for hire. In her first-ever solo series, Punk Mambo investigates a series of abductions in the New Orleans gutter punk scene, stumbling upon a deadlier mystery that takes her to the haunted shores of Haiti. 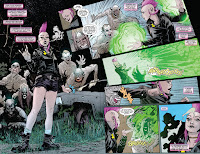 New story arc! “A GUY NAMED RAY,” Part 1. Two of the leaders of the Bloodshot team find themselves on thin ice with their bosses at Project Rising Spirit. With little left to lose, they decide to take down PRS—and they have just the perfect weapon to use! Writers Eliot Rahal (QUANTUM AND WOODY!) and Kevin Grevioux (Underworld) continue to declassify Bloodshot's origin in this action-packed series, featuring the return of Valiant artist Rags Morales (GEOMANCER, Action Comics)!

One of Valiant’s deadliest villains continues to wage war wherever she goes!

Heartbreak and violence as the woman known as War-Monger meets her match in the deserts of Mongolia. Seeking vengeance, Vexana the War-Monger finds a kindred spirit in the man who would become to be known as Dracula – Vlad Tepes, warlord of Wallachia!