Locked in a stalemate with the police, an unexpected loss sends Emily and the Bad Elvis Gang spiraling into chaos — but unfortunately, Emily’s dysfunctional wedding party isn’t going to take this lying down. Can this bride pull off one last escape, or will her worst secrets be unveiled?

Amalgama is a force of nature adrift in the cosmos… like a drop dead sexy apex predator in space. She’s a genetically engineered undead killing machine gone wild! The universe doesn’t stand a chance!! 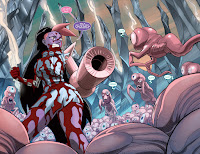 Angel finds herself in Rome, Italy, and smack dab at the center of a necromancer conspiracy that will change everything she thought she knew about religion! Also, she discovers that her powers are beginning to manifest in strange and exciting ways. And not only is her power set growing--so are her companions as a new cast of characters also emerge in this thrilling new story arc! 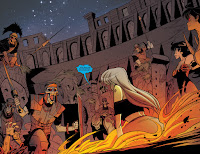