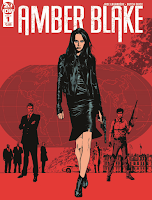 Amber Blake was only a child when she was recruited to the Cleverland Institute, a school for gifted children. But predators hide in the school’s administration, abusing the children they’re meant to protect, and, on the verge of exposing them, Amber finds herself fleeing for her life from the very man who recruited her. But she’s not dead yet—and she’s not the only one who wants to see Cleverland’s leaders burn. 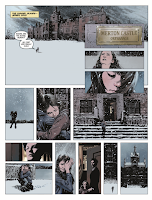 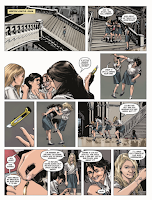 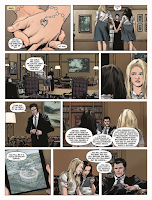 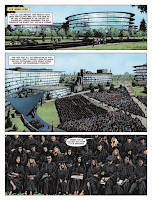 Atomic Robo just opened Tesladyne Institute’s doors to the next generation of Action Scientists. Meanwhile, an old comrade has an urgent message about the Vampire Dimension: it’s bad. Bernie might be speaking with the real Queen of Hollow Earth, instead of a hallucination? Jury’s still out on that one. Oh, and y’know the subplot about Robo’s secret robot son? Well… it’s fine. Everything’s fine.

The 35th Anniversary of the Ghostbusters is upon us! Let’s celebrate with four spooktacular weekly comics featuring different Ghostbuster teams in all-new standalone adventures!

First out of the Firehouse are the original ‘busting team of Peter, Winston, Egon and Ray, who have seen a lot of things during their time as paranormal investigators, but the latest case might just turn history on its head! Could it be that they’ve found proof of… Atlantis? It’s a case full of saltwater and slime with the ORIGINAL GHOSTBUSTERS!

“The Cobra’s Venom,” Part 5. Mad scientists, even madder robots, and a small, desperate team of Joes left alone to defeat them at any cost! The final chapter in the latest bombastic arc of living legend Larry Hama’s magnificent G.I. Joe: A Real American Hero run!

Lost in an ocean of Infinite Nothingness, Number Horowitz has to wonder: Has the universe disappeared—or have I? It’s a question she has to answer quickly, because the lives of every living creature in Creation depend on it! Join Number and the Impossible Inc. crew for the cosmic conclusion to the mini-series!

The line between hunter and hunted gets blurred when the Lodger gives into temptation. And out on the open road, Ricky and Golddigger close in for the kill.

After her latest defeat, Chandra feels broken as events of the past continue to haunt her, and a familiar foe seizes the opportunity to strike! Will Ajani’s heroic intervention be enough to help her overcome the threat and stop her from traveling farther down a self-destructive path?

Rising star writer Vita Ayala and powerhouse artist Harvey Tolibao continue to expand the bounds of the Multiverse in the first Magic: The Gathering® series in nearly five years!

Readers of all ages can get lost in the technologically advanced African nation of Wakanda as they follow the adventures of its monarch, the Black Panther! King T’Challa is responsible for defending his people—and the world—from any threats. And he gets plenty of help—and sass—from his genius sister Shuri. A Marvelous new era begins here!

A terrifying noir nightmare in the occult underworld of Las Vegas! Face to face with an ancient evil, Alexis searches for signs of her old partner inside of what is now the demon Ashmedai. Narrowly escaping defeat (at a heavy cost), Chris and Alexis grow closer, only to be confronted by true evil—and it’s not what they expected...

What happens when Uncle Scrooge gets his greedy hands on Donald Duck’s magical hammock? Nothing simple and easy, that’s for sure! While Donald just wants a well-earned nap, Uncle Scrooge has other ideas in mind… See the hilarious results in “The Helpful Hammock!”